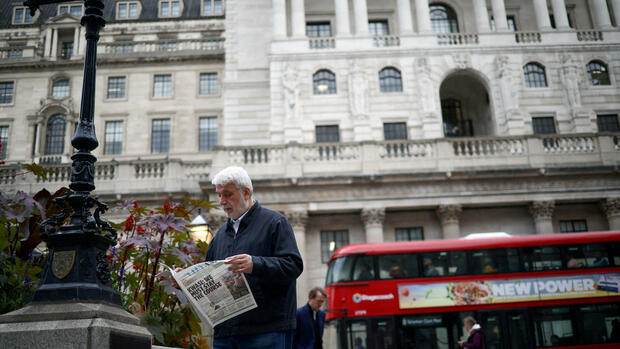 London According to a media report, the British central bank is ready to extend its emergency purchase program for bonds. The Bank of England (BoE) signaled this to lenders, the Financial Times reported on Wednesday, citing three insiders.

Accordingly, it will act should market conditions so require. Initially, the BoE had signaled that it would only take action until Friday.

The local currency, the pound, rose by up to 0.4 percent against the dollar after the report was published. However, experts do not believe in a sustainable recovery. “Either way, sterling is likely to remain volatile,” wrote analysts at the Commonwealth Bank of Australia. “There is a risk of a sudden pullback amid uncertainty over sovereign debt sustainability and dislocations in UK pension funds, which have impacted the UK government bond market.”

To reassure investors, the British central bank had only announced the purchase of inflation-linked securities on Tuesday. These are usually held by pension funds.

BoE Governor Andrew Bailey hinted at an end to the temporary buying program towards the weekend. The pension funds and other investors would have three days to solve their problems. “We have communicated that we want to get out by the end of the week. We think the rebalancing has to be.”

The new British finance minister, Kwasi Kwarteng, recently fueled doubts about the ability to finance these reliefs with plans for debt-financed tax cuts. Injections worth billions from the BoE only temporarily calmed the situation. The bond market sold off again and again in several waves – including recently. According to the central bank, this created a “material threat” to financial stability, which it intends to counter with the additional emergency measures.

The International Monetary Fund (IMF) renewed its criticism of the government’s actions, which are interfering with the BoE’s anti-inflationary efforts with its tax and spending plans. IMF chief economist Pierre-Olivier Gourinchas said the central bank is trying to tighten monetary policy while the government aims to boost aggregate demand.

More: There is an acute risk of a crisis on the financial markets – one comment

12
All Comments
Bank of England ready for extended bond purchases There are no comments yet! You can make the first comment.