Düsseldorf The German stock market is in a constructive position. Because despite the price gains of the past few days, the mood among investors has not yet improved. At the same time, the willingness to invest has climbed to the highest level in the past seven months.

This is shown by the evaluation of the Handelsblatt survey Dax sentiment and other indicators. Sentiment and the high willingness to buy show that many investors are waiting for the next opportunity to get back into the stock market. The price slide last Thursday was too short for that. Within an hour, the Dax dropped by 300 points, but immediately made up for the losses.

A constructive starting position means that if the prices start to slide due to negative news, this would offer an opportunity for a re-entry. On the other hand, investors are not positioned for rising prices and run the risk of chasing prices if there is no further setback.

Prices would then slowly rise until apparently underinvested investors lost patience and rushed to buy at any price, likely leading to a rally.

The course of the past trading week already fitted into the scenario that sentiment expert Stephan Heibel developed last Monday after evaluating the Dax sentiment survey. “It will be difficult for downward momentum to establish itself, downward movements should lose momentum early in the coming days,” he explained a week ago.

Although the downward pressure on the stock markets continued in the past week, even two very negative pieces of news did not lead to new lows. Neither the minutes of the last US Federal Reserve meeting, which showed that the members were surprised by the persistence of the high inflation, nor subsequently again surprisingly high inflation figures from the USA. 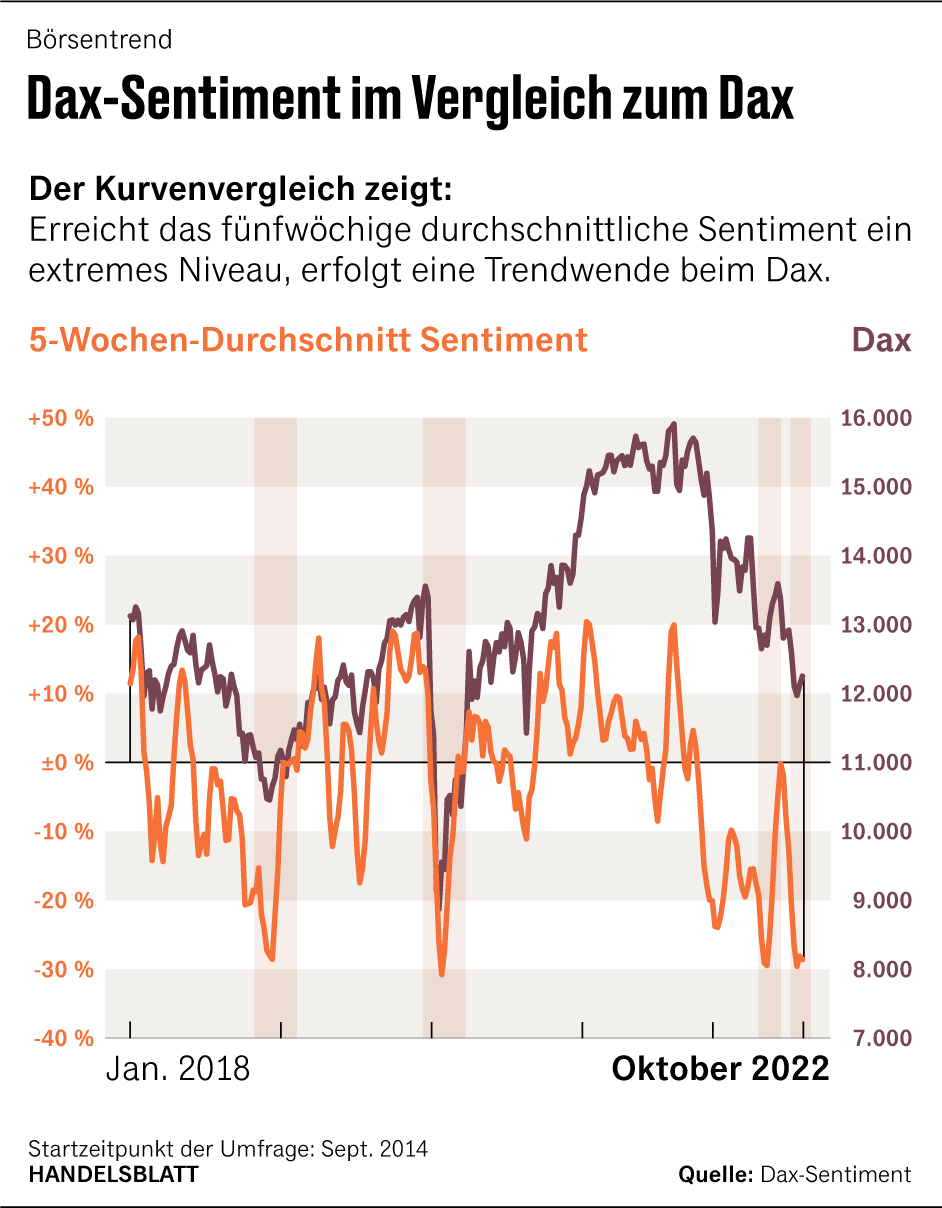 The sell-off ended at 12,000 points in the Dax, and the strongest recovery rally in recent months followed. In the meantime, the German stock exchange barometer jumped 5.5 percent and ended the week with a weekly plus of 1.3 percent at 12,438 points.

“Anyone who wanted to sell has had the opportunity to do so several times,” Heibel confirms his view from last week. Even negative reports therefore did not lead to a dynamic downward movement. Rather, there were many investors who were waiting for lower prices to finally get in.

For the participants in the survey, this violent price fluctuation in the previous week was disconcerting. Although investor sentiment rose slightly from minus 5.0 in the previous week to minus 4.0, there can be no talk of relief. Because a value of minus four still means panic.

The uncertainty also remains high after minus 3.7 on Monday a week ago with a value of minus 3.2. Apparently very few used the short sell-off last Thursday, which only lasted about an hour, for purchases.

The future expectation has risen slightly to minus 0.3. While the bear camp, which anticipates falling prices, still has the upper hand slightly, the number of bullish bulls is growing.

There was a big jump in the willingness to invest: After plus 1.7 in the previous week, the current value of plus 3.1 shows the greatest willingness to invest since the sell-off in March. At that time, the start of the war in Ukraine caused stock prices to drop significantly.

The Euwax Sentiment of the Stuttgart Stock Exchange, where private investors trade, is in neutral territory with a value of minus one. The number of call and put leveraged products on the Dax in the depots is roughly the same.

Continued extreme anxiety in the US market

Institutional investors who hedge themselves via the Frankfurt futures exchange Eurex are betting slightly on rising prices. At 1.1, the put-call ratio is below the average level of the past few months. In the US, investors are a little more pessimistic. The put-call ratio of the Chicago derivatives exchange CBOE is at a comparatively high level, which signals strong demand for put options.

US fund managers have reduced their investment ratio again. At currently 20 percent, this value is at the second lowest level in recent months. US private investors remain extremely pessimistic. The bull-to-bear ratio is minus 36 percent. At 56 percent, the bears still make up more than half of all private investors, while the bulls are clearly in the minority at 20 percent.

The “fear and greed indicator” of the US markets, calculated using technical market data, is trading at 22 percent, signaling extreme fear in the market.

Note on my own behalf: Would you like to meet sentiment expert Stephan Heibel and ask him questions about sentiment analysis? There is a chance to do so on Monday afternoon (October 24th), including a visit to the Center for Applied Aeronautics Research in Hamburg. There are still a few tickets left for the event. If you are interested in participating in the event, send an email to [email protected].

There are two assumptions behind surveys such as the Dax sentiment with more than 7,500 participants: if many investors are optimistic, they have already invested. Then only a few are left who could still buy and thus drive prices up.

Conversely, if investors are pessimistic, the majority of them have not invested. Then only a few can sell and thus depress the courses.

Do you want to take part in the survey? Then let yourself be automatically informed about the start of the sentiment survey and register for the Dax sentiment newsletter. The survey starts every Friday morning and ends on Sunday afternoon.

More: Investors make these ten mistakes from the point of view of stock market psychologists

11
All Comments
Good starting position for the Dax – investors’ willingness to buy rises to a seven-month high There are no comments yet! You can make the first comment.