IMF warns of domino effects on the global financial markets 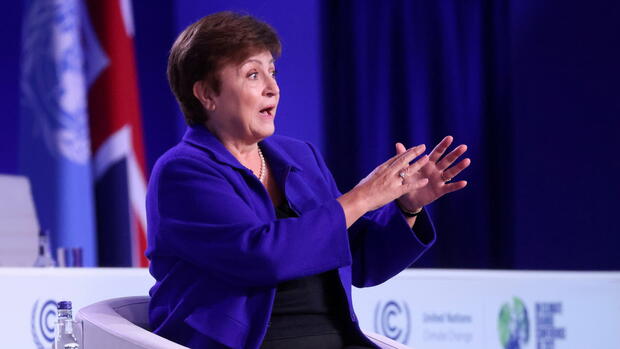 Washington It is the first meeting of the International Monetary Fund (IMF) and the World Bank to be held in Washington since the pandemic. 10,000 participants are expected in the US capital. And the mood is worse than it has been for a long time.

The meeting of the international political and financial elite in the coming days will be dominated by high inflation, the sometimes sharp interest rate adjustments by international central banks and the consequences of the war in Ukraine. At the same time, the IMF is concerned about the impact global tensions will have on financial markets.

“Risks to financial stability have increased significantly,” said the fund’s Global Financial Stability Report, released on Tuesday. The actions of the central bankers are at the center of the developments.

The US Federal Reserve (Fed) is increasing interest rates and reducing its balance sheet, leading to less liquidity in the markets. This is how the monetary politicians want to fight the rapidly rising prices. The IMF warns that this will have serious consequences all over the world.

This could lead to a “rapid and disorderly” adjustment of prices on the markets. This would then hit existing weak points. Since liquidity in the markets has already declined, they are vulnerable.

“Liquidity in markets has deteriorated across different asset classes,” the report said. This also applies to markets such as US government bonds, which are generally known for their high liquidity.

The situation is also aggravated by the dollar, which has risen more sharply in recent months than it has in a long time. This will increase inflationary pressures around the world, economists warn. Economies could be forced to make additional rate hikes to offset the effect.

The weakening of other currencies poses massive problems, especially for emerging countries that finance themselves in US dollars. Because there could be payment defaults, the IMF fears.

If conditions don’t improve, there could be debt restructuring. Insiders believe debt and concerns about a spate of defaults will be key issues at the IMF meeting.

Most recently, several prominent economists and analysts had put pressure on US monetary policymakers to reconsider their interest rate policy. “The Fed should proceed more cautiously, otherwise it will make a big mistake,” warned the independent capital market consultant Ed Yardeni in an interview with the Handelsblatt. Fed critic Mohamed El-Erian is also worried that the Fed’s policy could trigger an accident on the financial markets.

On Monday, a United Nations organization also got involved in the discussion – an unusual step. The Fed’s current course would hurt developing countries in particular and risk a global recession, according to a report by the United Nations Conference on Trade and Development (UNCTAD).

However, the Fed has recently shown its willingness to continue on its course. A further increase in key interest rates by 0.75 percentage points is planned for the upcoming meeting of the central bankers in early November – it would be the fourth of this kind in a row. In December, the monetary politicians want to raise interest rates again by 0.5 percentage points.

>> Read also: US market expert Ed Yardeni: “The Fed will only hike rates once more”

The IMF warned that companies and corporate bonds would also suffer from the global developments. “Large companies are reporting declining profit margins due to increased costs,” the IMF emphasizes.

At the same time, growth prospects would weaken as companies prepare for a possible recession. “For small businesses, we are already seeing rising bankruptcies in key developed economies as they suffer more from increased borrowing costs and falling government support.”

The risks are also increasing in the area of ​​leveraged finance. This refers to companies that are already heavily indebted and now have to pay even more money for loans.

IMF: Banks in US and EU resilient in the event of a recession

“Time will tell how consistent the credit quality of these assets is,” the report said. The consequences could also be felt in the broader economy.

The Monetary Fund conducts its own bank stress tests. In the event of a global recession in the coming year, a large number of banks in the emerging markets would no longer be able to meet the prescribed capital requirements, it has been found. In the US, EU and other developed countries, on the other hand, banks would remain resilient.

More: ‘The Fed is going too far’: Market turmoil sparks debate over pace of rate hikes

12
All Comments
IMF warns of domino effects on the global financial markets There are no comments yet! You can make the first comment.