Inflation in the euro zone just under ten percent 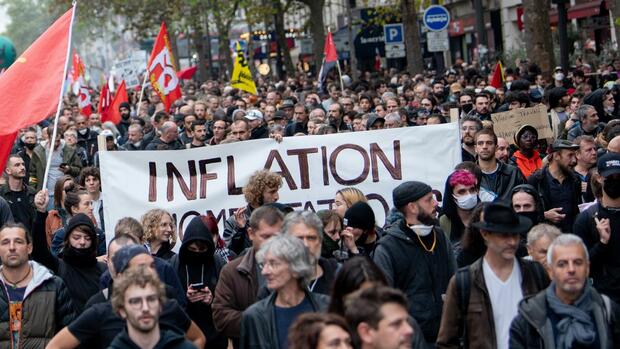 Frankfurt Inflation in the euro area continues to rise and remained just below the ten percent mark in September. Driven by a sustained surge in energy prices, consumer prices rose by 9.9 percent year-on-year in September, according to the statistics office Eurostat on Wednesday.

Inflation has never been so high in the 19-country community since the euro came into existence. A first estimate by Eurostat at the end of September even resulted in a rate of 10.0 percent. In August inflation was 9.1 percent. The pressure is therefore increasing for the ECB to take countermeasures with another XXL interest rate hike at next week’s monetary policy meeting on October 27th.

For many months, inflation in the currency area has only known one direction: further up. The European Central Bank (ECB) is aiming for almost two percent inflation for the economy. But she is getting further and further away from this goal.

Inflation is now almost five times as high. In the fight against the ongoing rise in prices, the monetary watchdogs have already implemented the turnaround in interest rates and, in quick succession, raised the key interest rate in two steps to 1.25 percent in the summer. The deposit rate, which is decisive on the financial markets, has now been increased to 0.75 percent. ECB President Christine Lagarde has also promised further steps upwards.

According to a Reuters poll, economists expect for the interest rate meeting next week another jumbo interest rate hike like in September by 0.75 percentage points. On average, they expect that the ECB will then raise the key interest rate to 2.00 percent. According to their forecast, the deposit rate will then be increased to 1.50 percent. In the ECB, too, euro watchdogs have already advocated such an XXL interest rate hike. Bundesbank President Joachim Nagel recently spoke out in favor of a robust rate hike, without naming a specific figure on the size of the step.

Among other things, the ECB is concerned that inflation has recently affected more and more areas of the economy. This is also reflected in the so-called core inflation, in which the volatile energy and food prices are factored out. This inflation measure rose to 6.0 percent in September after 5.5 percent in August.

Energy prices, driven by the consequences of the Ukraine war, rose particularly sharply. Within a year, they increased by 40.7 percent in September. In August, the price increase was 38.6 percent. Grocery, alcohol and tobacco prices rose 11.8 percent from 10.6 percent in August. Non-energy industrial goods prices rose 5.5 percent from 5.1 percent in the previous month. And prices for services also continued to rise in September: they increased by 4.3 percent, compared to 3.8 percent in August.

12
All Comments
Inflation in the euro zone just under ten percent There are no comments yet! You can make the first comment.