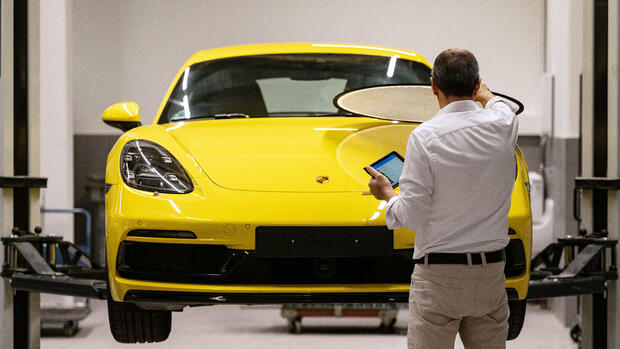 München Allianz demands that vehicle damage be increasingly repaired in the future instead of being repaired with new parts. So-called green repair methods would make a significant contribution to reducing CO2 emissions.

Allianz board member Klaus-Peter Röhler said at an insurer event on Wednesday: “If the insurers increase the repair rates in Europe by just two percentage points per year, our experts have calculated that almost 30,000 tons of CO2 emissions can be avoided.” That corresponds to that Energy consumption of around 5100 apartments per year.

In the past, damaged parts were often exchanged for new parts in the event of insured accident damage. The move by Europe’s largest insurer has a second dimension in addition to the environmental aspect: the industry has been complaining about rising prices for spare parts for years.

The General Association of the German Insurance Industry (GDV) recently calculated price increases of plus eight percent within one year for fenders, windshields and lamp housings.

Jörg Asmussen, General Manager of the GDV, complained: “Last year, property damage to a car cost the motor vehicle liability insurer an average of 3,375 euros, also around eight percent more than in the previous year.” In 2013, this value was still around 2,400 euros. The result is increasing contributions, which many customers experience, especially after an upgrade, due to accidental damage caused by their fault.

The dispute between insurers and car manufacturers is about the “design protection” of a car. This also regulates that all visible bodywork spare parts can only be obtained from the manufacturer.

Asmussen therefore criticizes “a quasi-monopoly”. The use of used parts is already established in France and Great Britain. Christoph Lauterwasser, Managing Director of AZT Automotive (Allianz Center for Technology), says: In Germany there is a need to catch up.

This is an accusation that Klaus-Jürgen Heitmann, head of Huk-Coburg, has been making of the car manufacturers for years. As a countermeasure, the German market leader in motor vehicle insurance acquired around a quarter of the Pitstop workshop chain in the summer.

The wage costs, which sometimes reach hourly wages of 200 euros and more in contract workshops for insurance claims, could be reduced if the customer agreed a so-called workshop commitment in his contract. Then his damaged car would be repaired in the insurer’s workshop network.

From Allianz’s point of view, repairs in the event of damage instead of replacing them with new parts would be a step towards more sustainable motor vehicle insurance. According to CEO Klaus-Peter Röhler, this also includes uniform certification of European workshops according to sustainability criteria. This is the only way to consciously include these aspects in the selection of a workshop.

11
All Comments
Insurers demand fewer new parts for vehicle damage There are no comments yet! You can make the first comment.