Out of German stocks because of the crisis? Not quite 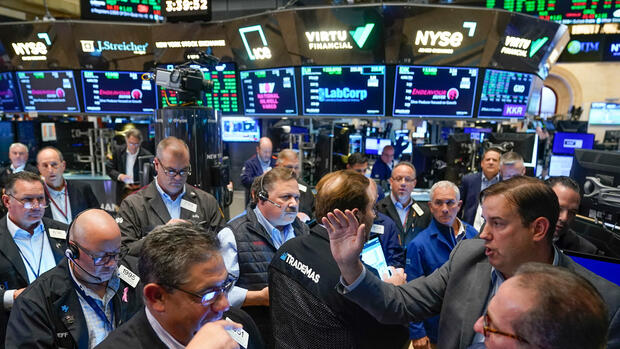 Frankfurt In the past, there was relatively little money to be made with German shares. Now the consequences of the energy crisis are on top of that. “The worse development of the German stock exchange compared to Europe, but also compared to the world stock index should therefore continue,” expects the well-known fund manager Jens Ehrhardt, head of the asset manager DJE Kapital. It’s no wonder that many fund professionals only give Germany a sideways glance.

But that is not the only assessment of the German market: Others also see buying opportunities. The Handelsblatt gives an overview.

The huge difference in earnings between German stocks and US stocks is striking. The leading German index, the Dax, has just doubled since 2010. During this period, the broad US bar S&P 500 quadrupled. This was also driven by the share price boom of the large technology groups Alphabet, Amazon, Apple and Facebook. The Nasdaq 100 index for US growth companies has even increased more than eightfold – even if technology stocks have lost significantly so far this year.

As an explanation, Ehrhardt also refers to the recent increase in producer prices of an enormous 46 percent in September. “The main beneficiaries of Germany’s loss of competition will be China and the USA,” he estimates.
His unflattering verdict: “Germany’s long-term decline is its own fault and could have been avoided.” Ehrhardt even speaks of the “self-destruction of Germany”.

Such a pessimistic outlook for the economy has consequences for the investment strategy of Germans: “Regarding the development of the stock indices and currencies, as a German you will increasingly have to concentrate on investing abroad, primarily in the USA, but also in Switzerland”. , he says. He is encouraged by the strength of the dollar and the Swiss franc with its recent record high.

Niall Gallagher has an even more extreme perspective. The head of European equity strategy at fund house GAM Investments even considers the investment risk in China to be lower than that in Europe. Asked about his assessment of geopolitical risks in equity investments in companies with a high proportion of sales in China, he replied: “We would see an increasing proportion of companies in the portfolio in China as positive, because it dilutes the European exposure.”

Gallagher considers Europe’s situation to be “unfortunate: With the current development, there is a risk of deindustrialization, a collapse in consumption and, over time, serious social unrest,” fears the equity strategist.

Carsten Klude is also worried. The chief economist at Bank MM Warburg & Co. is also thinking about a possible turning point: “Now the course is being set to determine whether the current situation will remain a temporary crisis or whether it will be the starting point for the long-term decline of Germany and ultimately of the continent.”

For him, such a crisis is a German and a European one. Because gas is five times as expensive in Europe as in the USA, local companies have to adapt, he emphasizes. Some company managers therefore looked at other and cheaper locations. The switch to renewable energies is a huge challenge: “We have a Herculean task ahead of us, the dimensions of which – with all due respect – have not yet been understood by politicians.” The efforts required for this are otherwise only known from the war economy, says Klude .

Risks in the bond markets

In addition, he is concerned about the situation in the European Union, for example when he looks at the massive increase in interest rates on Italian bonds. And the current events in Great Britain frighten him: “There was the feeling that the financial system would stumble if the central bank had not intervened.”

Despite all the skepticism, Klude emphasizes that the customers of the in-house asset management naturally have a special relationship with Germany and Europe. For this reason, a neutral capital allocation is defined for the in-house stock portfolio, with shares for Europe of two-thirds and for the USA of one-third.

“In the past few years, we have increased the weighting of the USA to half at the moment, and reduced it to the same proportion in Europe,” says Klude, with a view to the long-term additional return of US stocks compared to German stocks: “You can see where the music played – and where it will play in the future.”

Interestingly, for an investor who spreads his money across the world’s stock markets and does so with the help of an index investment, the question of Germany also posed itself – but in a completely different way. A popular investment product is the exchange-traded index fund, ETF, on the MSCI world stock index. This benchmark focuses on the stock exchanges of developed countries. Shares are based on market capitalization.

Only two percent in the world index

In this index, Germany only has a small share of two percent due to its small stock exchange, the euro zone has a total of around 15 percent. In contrast, the USA has a very high 70 percent. Such an investment “is of course a clear bet for the USA and against Europe,” sums up Klude. With the distribution of investor capital according to market capitalization, however, this distribution reflects past developments and thus the stronger price increases overseas. 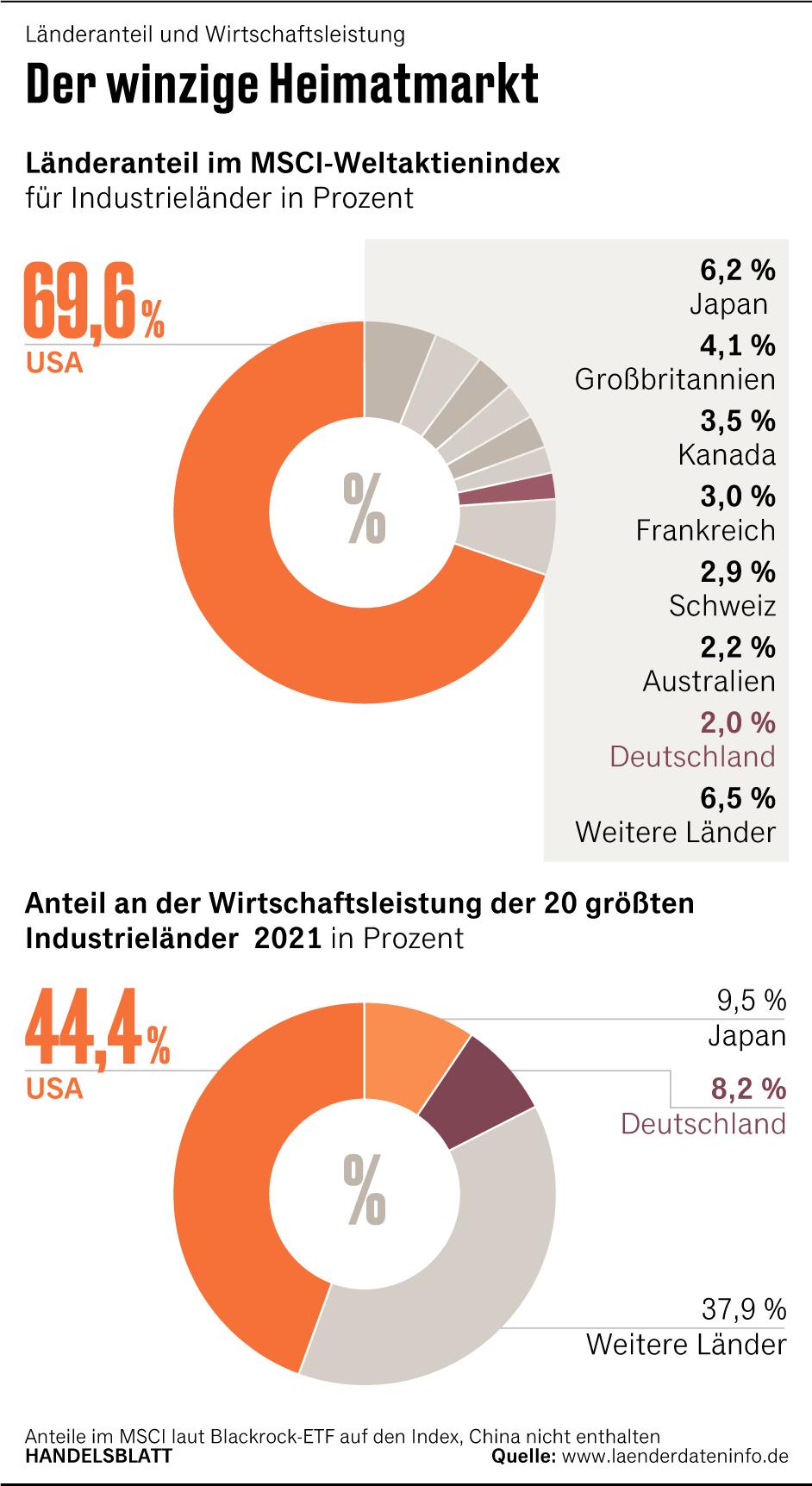 This is where Peter Huber comes in. The experienced fund manager at the asset manager Taunus Trust is convinced: “An index should actually reflect the economic power of the country.” Measured against the economic output of the 20 largest industrialized countries, Germany should therefore account for more than eight percent. According to Huber, the high US shares in the MSCI benchmark are not due to phenomenal earnings growth overseas, but to a higher valuation of stocks on Wall Street.

According to the analyst estimates for expected company profits this year, the S&P 500 shares have a price-earnings ratio of 18, the shares in the Dax 40 at twelve. For Huber, it is clear that the well-known MSCI world index cannot offer an appropriate allocation of equity funds: “If I want to have a balanced portfolio, I will not put 70 percent of the money in a highly valued market.”

Concerns about Germany’s political and economic future are widespread. “If politics scares you here, that’s all the more reason to invest internationally,” says Gerd Kommer, asset manager and index fund expert. Even if an investor is convinced that America is better positioned for the future than Germany and Europe, and that the dollar is a safe haven, he does not have to put all his cards on Wall Street.

Kommer therefore advises a broader allocation of funds compared to the MSCI World: In the simplest case, the capital can be divided between three to four index funds, each with a geographic focus. The individual products are then concentrated in the USA, in Europe, in Asia and possibly in emerging countries.

Incidentally, fund manager Huber does not believe that the current crises are worse than previous crises from a stock market perspective: “We hear that every time the markets bottom, but it contradicts the stock market experience of the last two centuries.” The currently very poor expectations are with the large price drops already priced in this year.

Huber also assesses the economic situation in a similar way to fund manager Ehrhardt. He also points to the highest energy and electricity costs in the world: “Germany is getting rid of itself! The German economy is being driven to the wall.” But Huber draws completely different conclusions for his portfolio strategy.

The large German companies are internationally active, he emphasizes: “They are unjustly punished.” The Dax is now valued as low as it was at the stock market lows seen in March 2020, early 2009, March 2003 and October 1987. And the mood up on both sides of the Atlantic is deep in the basement, he says. It reminds the experienced fund manager of the stock market low after the financial crisis in March 2009. So Huber now sees long-term buying opportunities in this country: he gradually increases his positions.

11
All Comments
Out of German stocks because of the crisis? Not quite There are no comments yet! You can make the first comment.