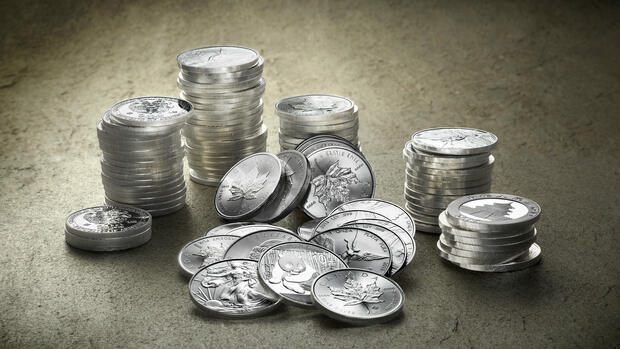 Frankfurt Shortly before the long holiday weekend of October 3rd, things got hectic among German silver coin dealers. A letter from the Federal Ministry of Finance (BMF), which was still unknown at the time, was floating around on the Internet. And that caused horror: the common practice of taxing many silver coins from countries outside the EU at a lower rate is not allowed, it said.

Affected are the American Eagle, Krugerrand, Maple Leaf and Kangaroo, the coins most popular with small investors. Because these were often cheaper than, for example, the Vienna Philharmonic, thanks to the tax advantage at the same value. But this deduction due to a tax advantage is not at all compatible with EU law, the Ministry of Finance clarified.

The precious metal association warns that the consequences for the industry can sometimes be life-threatening. Investors are also unsure whether they can now be prosecuted for tax evasion. Silver coin prices have already risen significantly.

Silver coins are subject to sales tax twice, once when they are imported and then when they are sold. For certain coins, the import tax is seven percent and as a result, differential taxation has often been applied to them. This means that when you sell, the sales tax of 19 percent is only levied on the difference between the purchase and sale price instead of on the entire sale price.

According to the sales tax law, however, this tax concession may only be applied to certain collector coins whose value is more than 250 percent higher than the material price. In 2004, however, the BMF published a letter with simplification rules, based on which the seven percent has since been applied to practically all silver coins imported into Germany from a non-EU country and consequently also the advantageous differential taxation.

The customs who levied the import tax, the traders who calculated the tax at this level, and the tax offices who prepared the corresponding tax assessments, implemented this in practice for years. On October 6, the BMF posted the new letter on its website. This made it official that it did not consider the previous procedure to be compatible with the law.

The letter only mentions the import tax, but Stefan Weber, professor of tax law at the Neu-Ulm University of Applied Sciences, sees that the differential taxation for the majority of silver coins is also not in accordance with the law.

The letter applies to all “open cases” with immediate effect. Since companies usually pay their sales tax monthly, these are mainly cases from September and October. In addition, the open cases – and this is where the explosive force of the letter lies – also include “tax cases in which the tax return/tax assessment can still be changed procedurally,” explains a BMF spokesman.

This concerns both tax assessments against which an objection has been lodged and all cases in which the tax assessment is subject to the so-called “reservation of review”.

And that’s the vast majority. Because the tax authorities usually put the notice under every corporate tax assessment, so that the taxes can be corrected later, for example after a tax audit. The limitation period is four years. “VAT assessments can therefore be changed every four years,” confirms the Bavarian State Office for Taxes.

The dealers threaten to remain sitting on the tax debts. Small investors who bought the coins at a lower price usually do not have to expect an additional claim, says tax lawyer Weber. “The tax office can retrospectively demand the taxes from the retailer, while the latter cannot repeat the subsequently demanded sales tax from private individuals, since the agreed price is always to be understood as a gross price.”

Other legal experts believe that dealers could subsequently correct their invoices. But due to the small-scale business, this is hardly practicable, says York Tetzlaff, Managing Director of the Fachvereinigung Edelmetalle (FVEM): “Due to the large number of private customer transactions, a retrospective improvement of the taxation for the precious metal dealers in “open cases” would be almost impossible”.

criticism from the opposition

The industry was surprised by the letter. “We are very surprised that the FVEM as an industry association was not consulted in the run-up to this BMF letter,” notes Tetzlaff. In other areas of sales tax related to the precious metals industry, this was definitely the case in the past. The customs authorities also do not appear to have been informed in advance, at least they only changed the import tax on October 12, reports Tetzlaff.

The uncoordinated process caused criticism from the opposition: “The approach of the Ministry of Finance is completely incomprehensible to me,” says Gunther Krichbaum, European policy spokesman for the CDU/CSU parliamentary group. “So important application questions could not be clarified in advance, and the uncertainty is now great,” complains the politician. “A lot of tools seem to have been lost in the BMF with the change of government,” says Krichbaum.

“Protection of legitimate expectations must apply, at least for the past, and a transitional regulation must be introduced,” demands Tetzlaff. “After all, it is a long-standing legal practice for the key participants, such as tax and customs authorities, state banks and precious metal dealers.”

But the BMF is tough: “There is usually no reason for a general protection of legitimate expectations if the law is incorrectly applied,” explains a spokesman. Tax professor Weber confirms that the BMF is legally correct. Administrative regulations are merely instructions for the tax authorities. “Taxpayers could therefore not enforce a legal opinion of the tax authorities that is favorable to them, but possibly illegal, because the judge applies the law and not the administrative regulation.”

The professor recommends that traders correct any inaccurate sales tax advance returns and seek talks with their tax office. “After consultation with the tax consultant, affected dealers should proactively seek contact with their responsible tax office to discuss how to proceed with the old cases,” says Weber.

In the end, they could possibly be lenient. On request, the Hesse regional finance authority stated that such an application rule in BMF letters was not mandatory. “Depending on the situation, the highest federal and state financial authorities can also provide for other application regulations in BMF letters.” Customs, which collects the import tax, is still determining how to deal with the tax change. “It is currently being examined whether or to what extent customs will correct the import notifications,” a spokesman for the General Customs Directorate told the Handelsblatt.

More: Silver price moves away from the low for the year – entry for “brave investors” possible

11
All Comments
Silver coin dealers face additional payments There are no comments yet! You can make the first comment.