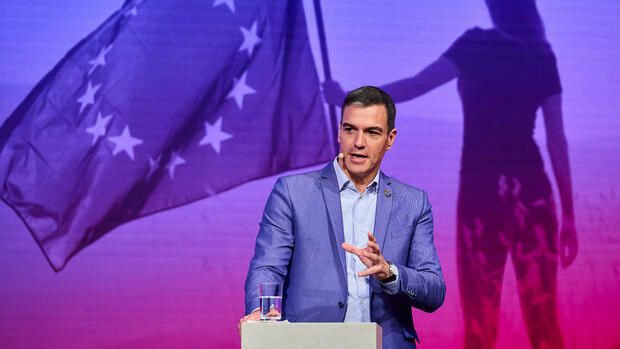 Madrid The planned special tax for banks in Spain is causing unrest in the industry – and soon possibly also trouble with the European Central Bank (ECB). On Thursday, Spanish Economics Minister Nadia Calviño met ECB President Christine Lagarde during a visit to Germany with the Spanish royal couple and discussed the planned tax, among other things. It is unclear whether a common denominator has been found.

Calviño then assured that the Spanish government had analyzed in detail possible concerns in its planning of the tax. In Madrid it is said that since the tax rate is so low and limited in time, there is no risk for the solvency of the banks.

The ECB has yet to comment on the project. ECB Vice President De Guindos explained that the ECB had put together a team of experts from areas such as supervision, financial stability, economics and monetary policy. Last Monday, he said the ECB could issue a non-binding opinion on the tax in the coming days or weeks after examining its impact on the industry’s solvency.

On another occasion, he said a new banking tax could have negative consequences for the industry and risk damaging the solvency of institutions. Spain’s central bank governor recently told the Spanish parliament that the ECB will focus on two issues – how the tax affects banks’ solvency and the transmission of monetary policy. The ECB’s opinion is not binding, the Spanish Parliament had asked for it.

In July, Prime Minister Pedro Sánchez surprisingly announced a special tax of 4.8 percent on the net interest income and net fees of the major Spanish banks. The tax is to apply for two years and bring three billion euros into the Spanish state’s coffers. Sánchez wants to use the money to finance state aid with which he wants to cushion the consequences of the war in Ukraine and high inflation.

Spain is the largest European economy to propose such a tax – but not the first: Hungary introduced a similar tax earlier this year. Analysts assume that other countries could follow, especially those with high national debt, as they do not want to finance the additional spending by borrowing more. The ECB’s statement should therefore not only be followed closely in Spain.

In Spain, the law should be passed by the end of the year. It also stipulates that banks are not allowed to pass on the cost of the new tax to their customers. The guidelines of the European Banking Authority (EBA) stipulate that the institutes must take all costs into account when pricing their loans – including taxes. However, the Spanish Ministry of Finance refers to the addition “if relevant” in the EBA guidelines. And that is not the planned tax.

The Spanish government introduced an excess profits tax for energy companies and a new tax for the wealthy earlier this year. She argues that the burden of war must be shared fairly. Numerous Spanish banks have announced enormous profit growth in recent months. They are the result of interest rate hikes by the ECB, which ended an eight-year policy of negative interest rates.

Nuria Alvarez Añibarro from the Spanish investment bank Renta 4 is also convinced: “The tax is unfair.” Rising and falling interest rates are a normal development in the various economic cycles and not an extraordinary phenomenon that justifies special taxes.

The banks’ equity ratios would not fall abruptly as a result. “But the tax limits banks’ ability to grow capital organically because it significantly reduces net profit,” she explains. According to their calculations, the banks’ net profits will fall by 15 to 20 percent over the next two years.

More: Commentary: There is an acute risk of a crisis on the financial markets

12
All Comments
Spain’s new bank tax is causing concern There are no comments yet! You can make the first comment.