Why the banks unexpectedly pay back little 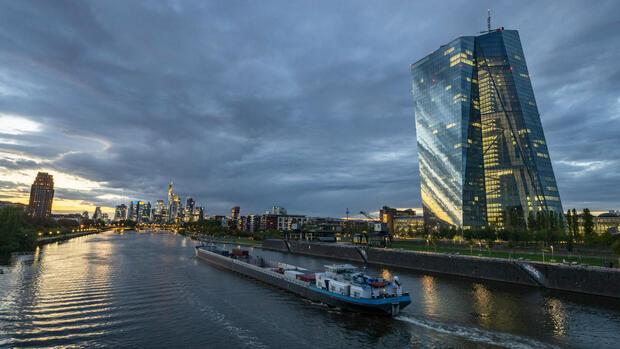 Frankfurt The expectations were clearly formulated. ECB Vice President Luis de Guindos stated just a few days ago that he expects “considerable” early repayments. But that turned out to be a mistake. It has been clear since Friday that the banks in the euro zone are repaying significantly less of the controversial low-cost loans early than expected, despite poorer conditions.

According to the ECB, the institutions in the euro zone have announced that they will transfer only 296 billion euros of the outstanding loan amount of 2.1 trillion euros in November. Economists had expected around 600 billion euros.

There could be two main reasons for the reluctance: High-ranking bankers believe that some financial institutions prefer to hold somewhat thicker liquidity buffers in view of the uncertain framework conditions. In addition, the repayment of the loans also depends on whether banks can post profits from the programs in 2022 or only in 2023.

It is rather good news for borrowers if the banks take their time with repayments. “An extensive early repayment would have greatly reduced liquidity in the market,” says Jens Eisenschmidt, European economist at US investment bank Morgan Stanley. “That would also affect general credit conditions and lead to rising interest rates for customers.”

On October 27, the ECB decided to retrospectively change the rules for cheap loans granted in recent years. In order to avoid a credit crunch, the Governing Council of the ECB launched a refinancing program on extremely favorable terms, known in technical jargon as TLTRO, of which the third is currently running. The only condition: the participating banks should maintain the flow of credit to companies in order to stabilize the economy.

However, due to the interest rate turnaround, the banks were recently able to simply park this cheap money with the central banks at sharply rising interest rates – and thus make risk-free special profits. The citizens’ movement Finanzwende spoke of “money gifts for banks”. With the subsequent change from this month, the ECB is now making this significantly less attractive – which many banks see critically.

“It is correct that the ECB has changed the conditions,” says economist Eisenschmidt. “It had already done this twice during the term of the TLTROs for monetary policy reasons in favor of the banks, this time to their detriment.”

Without the ECB’s changes, banks would have been able to earn EUR 7.9 billion more in the fourth quarter than in the second quarter with the help of ECB loans, analysts at Jeffries Financial Group have calculated. For some institutions, cheap loans were an important source of income: The rating agency Moody’s estimates that TLTRO loans at the Landesbanken BayernLB, Helaba and LBBW accounted for between a fifth and a quarter of pre-tax profit in 2021.

The frustration of many in the financial sector is correspondingly high. “We are deeply disappointed with this decision to subsequently change the conditions,” said Deutsche Bank’s CFO, James von Moltke, when the quarterly figures were presented. Top managers rarely speak so undiplomatically about the central bank, after all the ECB is also the supreme bank supervisor for the financial institutions in the euro zone.

Some banks now have extra costs instead of extra profits

But there is a lot at stake for the banks. After the adjustments made by the ECB, some banks now incur additional costs instead of extra profits: Some institutions had hedged the ECB loans against interest rate fluctuations with derivatives. They now have to dissolve these insurance policies at great expense.

At the Dutch ING, the extra costs amount to 315 million euros, at the Italian Unicredit to 313 million euros. According to the quarterly report, the Wiesbaden-based Aareal Bank is in the low to mid double-digit million range.

“Some banks are now having to shoulder additional burdens and are missing out on a certain part of their income,” admits Morgan Stanley expert Eisenschmidt. “But the earnings prospects, which have improved significantly as a result of rising interest rates, can more than compensate for this overall. The changed conditions for the TLTRO are more of an annoyance that doesn’t really matter to most people.”

In some financial institutions, however, anger over the ECB’s decision is so high that lawsuits against the central bank have even been considered. The ECB was aware that it was taking legal risks with its move. That was weighed up, ECB President Lagarde admitted after the decision. So far, however, no case has been reported in which a financial institution has taken the central bank to court. 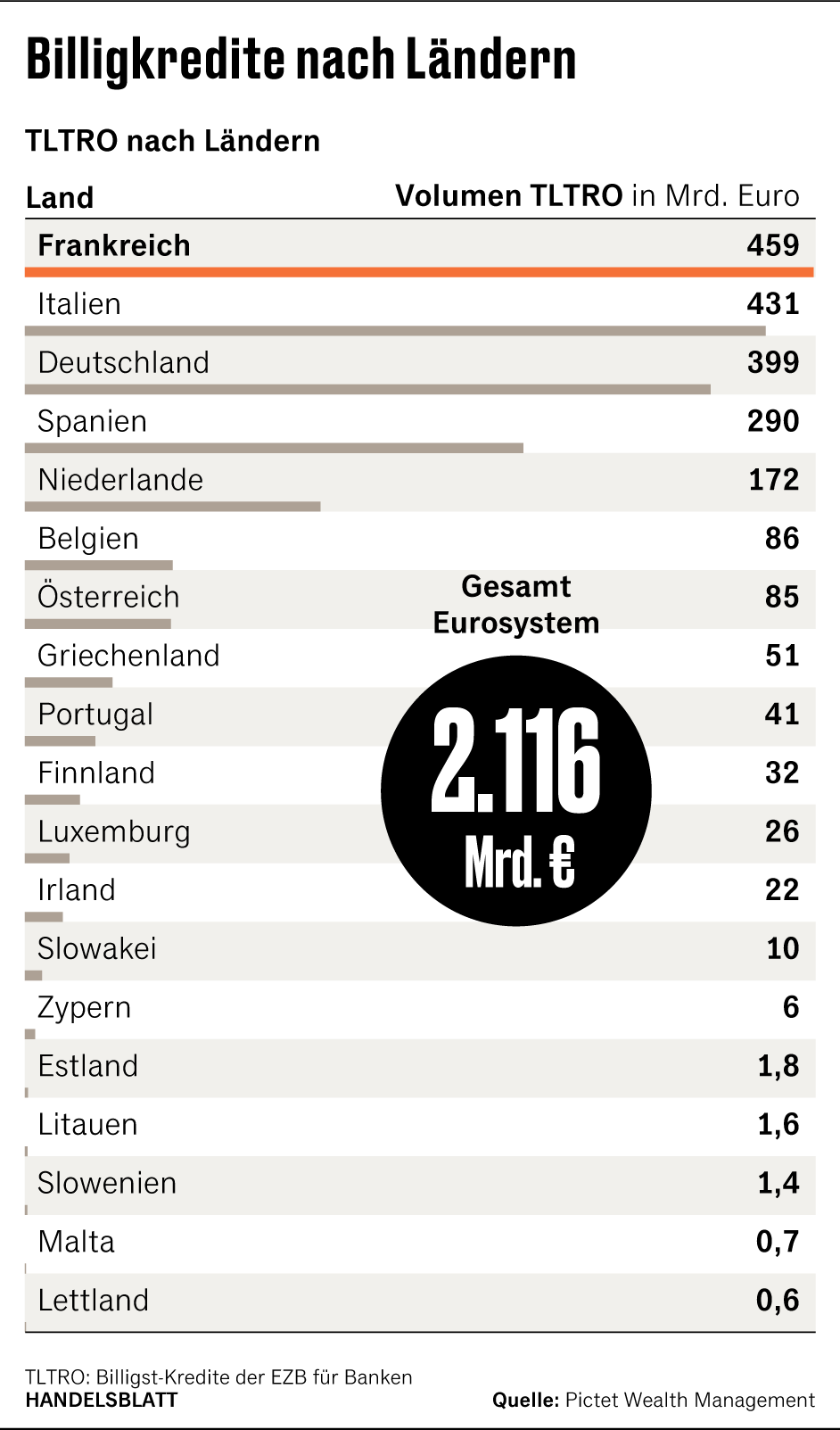 The loss of confidence in the financial sector is still great. “We have to be able to rely on laws being observed,” said Lutz Diederichs, head of BNP Paribas in Germany, at a recent financial conference. The top manager railed that the ECB was jeopardizing legal certainty in the euro zone with its actions. “This is an example that also deters investors when they see that things that were agreed upon are changed ex post.”

There was great demand from France and Italy in particular

In recent years, banks have taken advantage of the ECB’s cheap loans to varying degrees. Of the currently outstanding 2.1 trillion euros, 459 billion euros are held by French banks and a further 431 billion euros by Italian institutions. German financial institutions are in third place with a total of 399 billion euros.

The effects of the increase in the price of TLTRO loans on the banks’ earnings situation vary greatly. “The support from the TLTRO III was and remains essential for French banks,” wrote the rating agency Scope in September.

Italian banks have also secured extensive TLTRO funds. Scope analysts had expected that many Italian banks would now prepay these TLTRO loans. However, they also pointed out that the low-cost loans should also be a cheap source of refinancing after November 23rd. Therefore, the institutions would not fully repay the TLTRO funds. 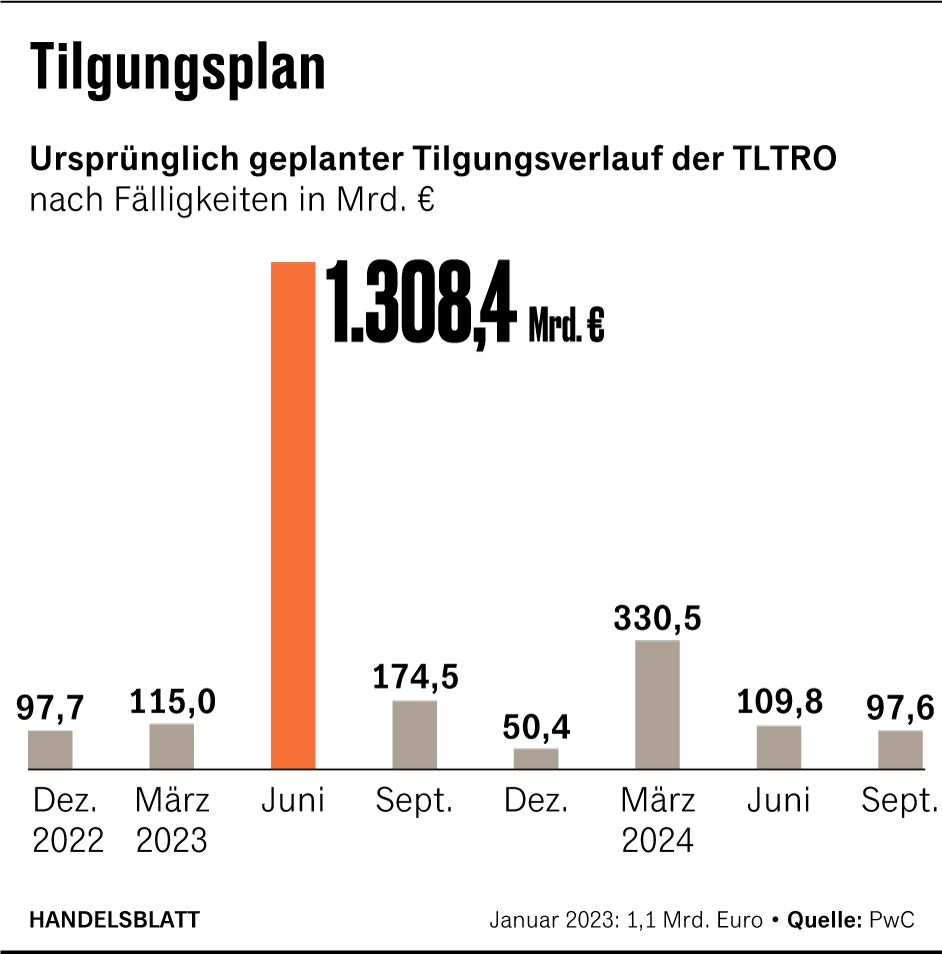 Commerzbank had borrowed a total of 35.9 billion euros. She has now waived part due to the changed conditions: “On November 23, Commerzbank will repay the first part of the funds from the TLTRO III program of the European Central Bank and make use of its special right of termination,” said a spokesman. The bank will still decide on further early repayments.

From Commerzbank’s point of view, the TLTRO adjustments show that banks should generally proceed cautiously when calculating income from monetary policy measures. After all, the interest rate policy of the ECB could change – just like the conditions of loan programs – said CFO Bettina Orlopp recently. “Being conservative sometimes helps.”

12
All Comments
Why the banks unexpectedly pay back little There are no comments yet! You can make the first comment.