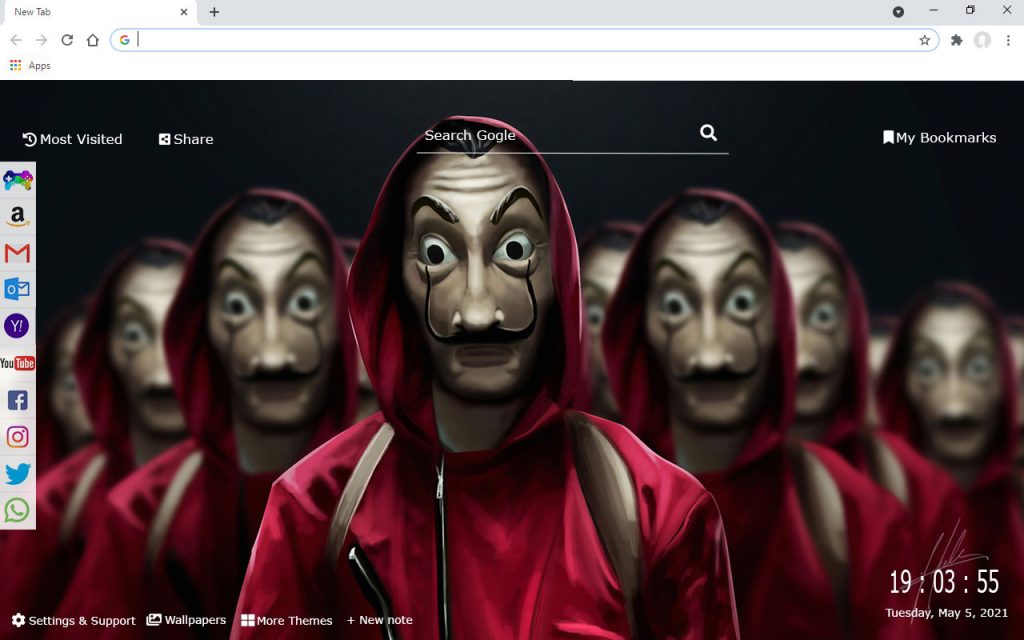 La Casa De Papel New Tab Features:
* It does NOT contain content that could endanger your security.
* Hey new tab wallpaper changes
* You can pin any of the wallpaper options
* Quick access with shortcut icons of the most visited websites on the left.
* Easy and fast Google Search
* Time and date
* Active / passive option from settings
* Adding notes
and many more features are waiting for you.

La casa de papel is a Spanish heist crime drama television series created by Álex Pina. The series traces two long-prepared heists led by the Professor (Álvaro Morte), one on the Royal Mint of Spain, and one on the Bank of Spain. The narrative is told in a real-time-like fashion and relies on flashbacks, time-jumps, hidden character motivations, and an unreliable narrator for complexity. The series subverts the heist genre by being told from the perspective of a woman, Tokyo (Úrsula Corberó), and having a strong Spanish identity, where emotional dynamics offset the perfect strategic crime.

The series was initially intended as a limited series to be told in two parts. It had its original run of 15 episodes on Spanish network Antena 3 from 2 May 2017 through 23 November 2017. Netflix acquired global streaming rights in late 2017. It re-cut the series into 22 shorter episodes and released them worldwide, beginning with the first part on 20 December 2017, followed by the second part on 6 April 2018. In April 2018, Netflix renewed the series with a significantly increased budget for 16 new episodes total. Part 3, with eight episodes, was released on 19 July 2019. Part 4, also with eight episodes, was released on 3 April 2020. A documentary involving the producers and the cast premiered on Netflix the same day, titled Money Heist: The Phenomenon (Spanish: La casa de papel: El Fenómeno). In July 2020, Netflix renewed the show for a fifth and final part, which will be released in two five-episode volumes on 3 September and 3 December 2021, respectively. The series was filmed in Madrid, Spain. Significant portions of part 3 and 4 were also filmed in Panama, Thailand, and Italy (Florence).

The series received several awards including Best Drama Series at the 46th International Emmy Awards, as well as critical acclaim for its sophisticated plot, interpersonal dramas, direction, and for trying to innovate Spanish television. The Italian anti-fascist song “Bella ciao,” which plays multiple times throughout the series, became a summer hit across Europe in 2018. By 2018, the series was the most-watched non-English-language series and one of the most-watched series overall on Netflix,[4] with a particular resonance coming from viewers from Mediterranean Europe and the Latin American world.